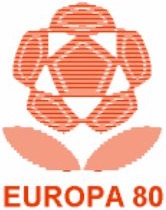 The sixth tournament was the first expanded format.  Italy had been chosen as hosts, preferred to England, despite having hosted the tournament in 1968 when they emerged as victors.  Eight nations were split into two groups.  Each team plays each other in the group once, with the winners progressing straight to the Final and the second placed sides meeting in a Third Place Play-off.

Greece had qualified for a major international tournament for the first time in their history.  Italy were the hosts and West Germany were defending champions 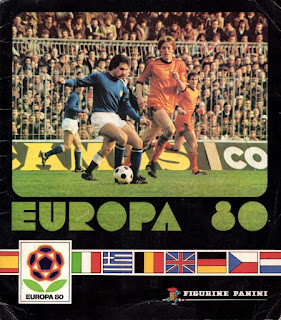 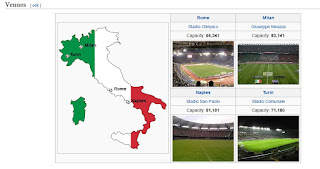 The tournament kicked off with a repeat of the 1976 Final as Czechoslovakia met West Germany in Rome.  A disappointing crowd of just over 11, 000 turned up to see the Germans gain revenge for four years previous as Karl-Heinz Rummenigge scored the only goal just before the hour.

Later that evening, Netherlands took on Greece.  The Greeks were in their first ever major tournament having won a tight group to qualify.  Barely 4,000 more turned up for this game in Naples, but still only witnessed one goal.  The penalty decision was a stange one. Konstantinou rolled the ball to one of his defenders just to the left of the area and as Vreijsen came in to try and nick the ball he collided with the Greek keeper. The referee decided Konstantinou stuck his leg out to trip the Dutchman and a penalty was awarded.  Kees Kist converted a penalty midway through the second half and that was enough to give the Dutch the points.


Three days later saw the big clash between West Germany and Netherlands in Naples.  For two fierce rivals, the Dutch had only once beaten West Germany in 8 previous meetings, back in 1956.  Cologne’s Klaus Allofs, one of the young breed of footballers the Germans were trying out, opened the scoring after 20 minutes.  On the hour, he scored his 2nd, and then completed his hat-trick five minutes later.  The Dutch were stunned, but fought back with a Johnny Rep penalty ten minutes from time.  When Willy van der Kerkhof scored to make it 2-3 with five minutes to go, the Germans had a nervous end to a game they were cruising.  They saw it home in the end, and seemed destined for the Final.

In Rome, Greece met Czechoslovakia.  In a stadium which holds 86,500, there were just under 5,000 people to witness this and the game deserved better.  Panenka, the hero in 1976, gave the Czechs an early lead, but Nikos Anastopoulos equalised soon after, only for Ladislav Vizek to put the Czechs back in front and we’d had 3 goals in the opening twenty-five minutes.  The Greeks couldn’t get back into it, and early in the second half Zdenek Nehoda completed the win for the Czechs.  If Greece could pull off a shock win over the Germans, then the Czechs or the Dutch would have an outside chance of the Final, but that seemed remote.

UEFA hadn’t found the need to have the final group matches kick off at the same time, so Netherlands and Czechoslovakia were up first in Milan, with the Germans waiting to see what they needed to do.  In front of another poor crowd Nehoda gave the Czechs an early lead, which they held till the hour, before Kees Kist equalised.  The game ended in a draw which suited neither side and the Czechs finished second in the group, ahead of the Dutch on goal difference.

By the time the last game in the group kicked off in Turin, West Germany already knew they’d reached the final.  It showed too as a dull game almost came to life when Ardizoglu hit the post with 20 minutes to go, but that was about it.  Greece had given a good account of themselves, but ultimately went home without a point.  The Germans had simply been clinical in reaching their 3rd successive European Championship Final.

England had managed to qualify for a major tournament just once since 1962, having made the 1966 and 1970 World Cup as hosts and holders, respectively.  They were hopeful of doing well after an impressive qualification campaign.  They started brightly too, and midway through the first half, Brooking’s cross wasn’t cleared properly and it fell to Ray Wilkins, just outside the box.  He controlled the ball on his chest and then as it bounced, he calmly lobbed the ball over the keeper for probably his finest goal in an England shirt.

But England were unable to keep control of the game and Belgium equalised within three minutes through Jan Ceulemans.  England had a goal from Kenny Sansom disallowed in the second half, but the game will be remembered for the violence that erupted on the terraces just before half-time.  Unfortunately, this was becoming an all-too familiar occurrence with England games at that time.  Many England fans would point to the local police being heavy-handed, but unfortunately England fans reputation often preceded them.  The game was held up as the police used tear-gas to try and quell the trouble, which had broken out because locals had gained access to England’s end and started chanting for Belgium.  England goalkeeper, Ray Clemence, was particularly affected by the gas. 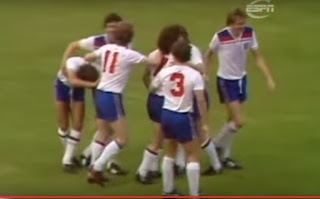 Later that evening in Milan, the hosts made their bow in front of over 46,000.  The game was a cagey affair with both sides cancelling each other out.  Spain had a goal disallowed in the second half, which seemed harsh but the points were shared.

After both opening matches were drawn, a win in the second game would give any of the four sides a good chance of making the final.  Belgium took the lead through right-back, Eric Gerets after seventeen minutes.  With ten minutes of the first half to go, Quini then equalised for the Spanish.  Both teams had chances in the second period, but it was veteran, Julien Cools, who scored the winner midway through the half.  Belgium now put the pressure on Italy.

England and Italy took the field in Turin, in front of the largest crowd of the tournament.  England manager, Ron Greenwood sprung a surprise by selecting Garry Birtles for only his second cap, and he struggled to make an impact.  England relied so heavily on Keegan, who was busy as usual creating chances.  Ray Kennedy hit the post, just before Marco Tardelli finally broke the deadlock with just over ten minutes to go.  The Italians were far from dominant but knew how to defend a lead.  They would now need to beat Belgium to get to the Final.  England could only hope for second place in the group.


After two games in Turin, England moved to Naples to meet Spain.  They were desperate to restore something from a tournament they were so confident of doing well in.  Trevor Brooking gave England a first half lead after nineteen minutes, but early in the second half, Spain were awarded a penalty.  Their substitute, Dani, took it and scored.  Five minutes later they got another penalty.  Dani took it and again scored.  Only this time the referee ordered it to be re-taken.  Dani stuttered in his run-up and it wasn’t clear whether that was what the referee objected to, or whether other players had encroached.  Either way Dani took it again and this time Clemence saved it.  Within ten minutes, England were back in front through Tony Woodcock, and they got the win they finally craved. 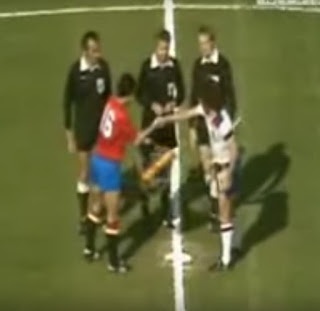 
Italy and Belgium met in Rome, knowing a draw was enough for the Belgians.  The game followed a similar pattern to previous ones in this group involving these teams.  Belgium were dogged in defence and Italy were blunt in attack.  The game ended goalless and, against all the odds, Belgium had reached a major international Final.  Italy and Italians were distraught, as they expected more.  They were unbeaten but 2nd place to Belgium was almost the end for manager, Enzo Bearzot.  He survived, and Italy went on to lift the World Cup two years later.

Czechoslovakia had defended their title with distinction, and competed well against the hosts.  Under pressure for most of the game, they took the lead just into the second half through Ladislav Jurkemik.  Italy, who had only scored once in their 3 games so far, finally managed to get a goal from one of their attackers, Francesco Graziani.  The game ended 1-1 and went to penalties.  Remarkably, each side had been successful from their first eight kicks.  Jozef Barmos, who had played in the Final in ’76, made it 9-8 to the Czechs before Fulvio Collovati had his kick saved and the Czechs had finished third. 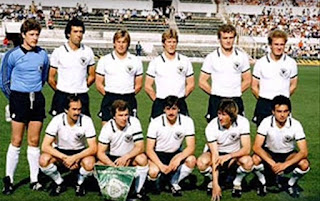 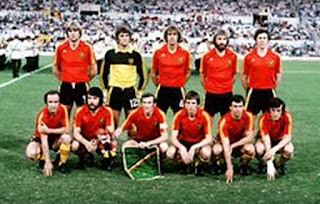 West Germany were the overwhelming favourites.  They had reached tournament Finals in four out of the last five they competed in, but this was a new German side being put together.  This gave us our first glimpse of players like Bernd Schuster, Hans-Peter Briegel, and Toni Schumacher.  But their success came through an unlikely hero.  Horst Hrubesch was part of the Hamburg side beaten by Nottingham Forest in the European Cup Final a month before.  A striker who was considered good in the air but nowhere else, Hrubesch opened the scoring after ten minutes with his first goal in international football.  Belgium came back at the Germans in the second half when Van der Elst was brought down and Rene Vandereycken converted the kick.  As extra time approached, Hrubesch headed his 2nd goal of the game and the Germans had won it.  Their third successive European Championship Final had brought their second success. 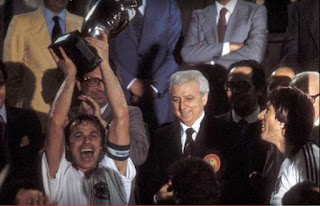 Had the new expanded format been a success?  The TV and stadium attendances would suggest not, but UEFA are hardly an organisation to often change their mind, and they continued with this format for the next three tournaments.  The format probably allowed an unfancied side like Belgium to go further than they might have done with just a Semi-Final and Final.  Italy, as hosts, were disappointing as were the World Cup finalists from 1974 & 1978, Netherlands.  Italy were under great pressure as hosts but suffered from their failure to score goals.  Just before the tournament they lost the services of Paolo Rossi, who’d won the Golden Boot at World Cup ’78, as he was embroiled in a betting scandal and banned from football for three years.

England gave us glimpses of their ability, but for a side so dominant in qualification, the finals had been a let-down.
They relied so heavily on Kevin Keegan yet the Hamburg striker had, had such a long season in West Germany and was clearly tired.  Hamburg reached the European Cup Final where they were beaten by Nottingham Forest, so domestically it had been a good season but the international disappointment tarnished it somewhat.  For West Germany, Italy and Kevin Keegan the World Cup in Spain two years later would have completely contrasting fortunes.
Posted by irishpete at 12:40